In the Cockpit: Target Tank 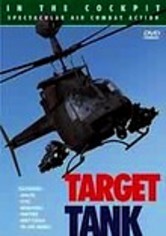 In the Cockpit: Target Tank

2006 NR 1h 0m DVD
From the first attack helicopter, the Huey Cobra, to the anti-tank Apache chopper, this documentary chronicles the use of defense helicopters, which began during the Vietnam War. First employed by the U.S. military to transport soldiers and civilians, helicopters were redesigned in the 1970s and '80s to withstand heavy fire, weapons were added, and they moved into combat, challenging the supremacy of the tank and revolutionizing modern warfare.