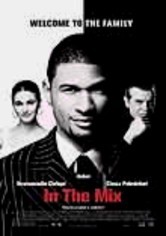 2005 PG-13 1h 35m DVD
A New York DJ winds up protecting the gorgeous daughter of a Mafia kingpin in this edgy romantic comedy. After he saves the life of a mob boss (Chazz Palminteri), DJ Darrell (Usher Raymond) is rewarded with a job guarding the don's daughter, Dolly (Emmanuelle Chriqui). There's sexy chemistry between the beauty and the bodyguard, much to the dismay of Dolly's old-school Italian papa, who's also dealing with a dangerous criminal power-play.

Parents need to know that this movie includes shootings, beatings, and references to other forms of "mob violence" (one character says his car was blown up). A body appears in a car trunk. The movie features reductive stereotypes: ignorant Italian gangsters; a white boy who acts "hip-hop"; a sexually aggressive black woman; a precocious child (who uses sexual slang); bling-blingy cigar-smoking buddies for the DJ; and a "Big Mama." Characters drink and smoke; women at the dance club wear revealing clothing and dance provocatively.

Conventional mob violence (shootings, beat-downs, a flashing switchblade, tossing a beaten victim from a slowly moving car, a body in a car trunk, then visible in a coffin at the wake).

Mobsters are dumb or self-delusional; characters lie and betray one another.