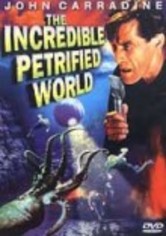 1958 NR 1h 6m DVD
Four members of a deep-sea expedition find themselves trapped in a maze of mysterious underwater caves when the cable on their diving bell snaps and the rest of their shipmates are forced to abandon them. 1950s-era B-movie director Jerry Warren helms this campy sci-fi adventure starring John Carradine, Robert Clarke, Phyllis Coates, Allen Windsor and Sheila Noonan.