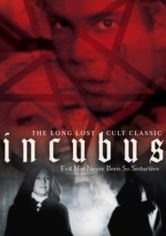 1965 UR 1h 16m DVD
A pre-"Star Trek" William Shatner stars in this bizarre horror flick about evil demons that use sex to conquer innocent souls for Satan. Wandering through an otherworldly place called Nomen Tuum, Shatner plays Marc, a decent man who battles a succubus named Kia (Allyson Ames) while trying to protect his sister from Kia's male counterpart (Milos Milos). The real kicker? The whole script is written in the "universal language" of Esperanto.