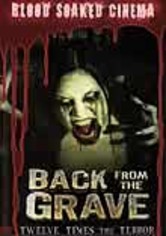 1956 NR 2h 27m DVD
In Indestructible Man, a scientist unwittingly revives executed criminal Butcher Benton, who now is an indestructible madman bent on revenge, while in The Monster Walks, dark doings surround the reading of a will at an ancestral mansion. Horror legend Lon Chaney Jr. works his on-screen magic in the former title of this spine-tingling double feature; Rex Lease and Sheldon Lewis star in the latter.