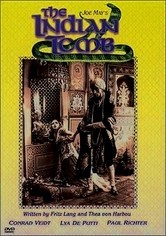 1921 NR 3h 32m DVD
The powerful Maharajah of Eschnapur (Conrad Veidt) has lost his beloved Princess Savitri (Erna Morena) to handsome British officer MacAllan (Paul Richter). Determined to get revenge, he constructs a massive tomb in which to imprison Savitri for eternity. But when the Maharajah ignores the warnings of doom from the yogi Ramigani (Bernhard Goetzke), he seals his own fate. The legendary Joe May directed this groundbreaking 1921 silent epic.