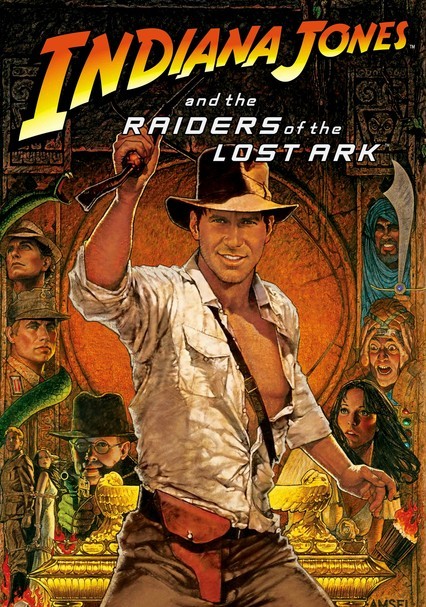 1981 PG 1h 55m Blu-ray / DVD
When Dr. Indiana Jones -- the tweed-suited professor who just happens to be a celebrated archaeologist and adventurer -- is hired by the government to locate the legendary Ark of the Covenant, he finds himself up against the entire Nazi regime.

Parents need to know that Raiders of the Lost Ark is a rip-roaring adventure with lots of hand-to-hand battles (fists, swords, whips) and plenty of guns. There's not too much blood and gore (though many young children are likely to be scared by a climactic face-melting scene, as well as one in which a thug's head meets the business end of a plane propeller), but it's still way up there in the body count department. Much of the thrill of this beloved movie is in the fright factor, so cadavers, snakes, spiders, and nasty villains (mostly Nazis and Nazi sympathizers) also abound. A couple of scenes feature drinking, including one in which the heroine knocks back a dangerous amount of alcohol to win a contest. And there's a bit of language, including one "s--t."

Some kissing and flirting (Indy's female students, in particular are quite blatant about it). When Marion is held captive, she's forced to dress up for her captor so he can admire her (she changes behind a screen as he waits/watches). Later the dress is cropped quite short. Implied sex between Indy and Marion; he's shown shirtless and getting out of bed.

Lots of hand-to-hand battles (fists, swords, whips) and plenty of guns, including one iconic point-blank shooting. Frightening/gross close-ups of melting faces and vengeful ghosts. A memorable scene of a man's head hitting a propeller -- blood splattering is shown. Indy is pursued by spear-wielding natives who want to kill him. Indy and Marion are lowered into a pit of poisonous snakes; there's also a close enounter with some very large spiders. A bar fire leads to a man's hand being badly burned/scarred. Near-constant peril.

Perseverance, teamwork, and trying to do the right thing are ultimately rewarded, although some of Indy's methods are iffy. Standing up to bullies (in the form of the Nazi party) is a strong theme.

Nothing in the movie, but there's plenty of Indy merchandise available.

In a scene played for laughs, Marion wins a drinking contest by pounding down enough alcohol to kill the average person. Other scenes also show wine/spirits drinking, including one in which Marion pretends to get drunk.