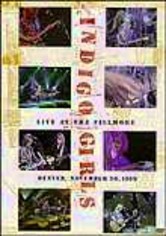 1999 NR 1h 31m DVD
Amy Ray and Emily Saliers, aka the Indigo Girls, weave timely issues into their beautifully harmonized tunes. The Indigos have spent more than 15 years perfecting their rock-infused folk sound, which is captured in a live 1999 concert at Denver's Fillmore Theater. Amy and Emily strum old favorites, including "Galileo" and "Closer to Fine," and they introduce some new songs. Also features an introspective interview with the duo.