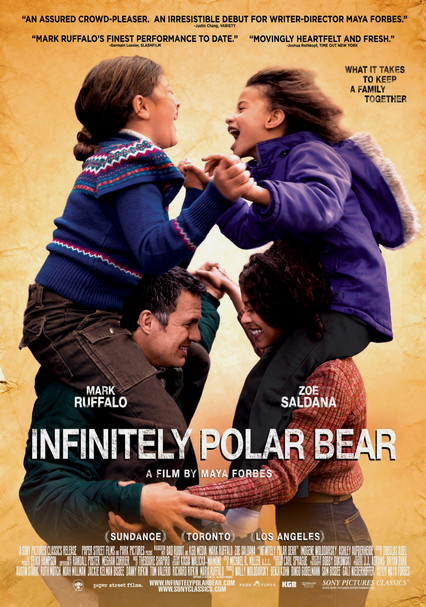 2015 R 1h 28m Blu-ray / DVD
When his wife heads to New York for an 18-month job, bipolar Harvard dropout Cameron is left to care for their two daughters. Struggling with his illness, Cameron brings his innate creativity -- and love of his children -- to the challenge.

Parents need to know that Infinitely Polar Bear is an intimate, '70s-set look at a family with a dad who has bipolar disorder. He (and consequently, his two daughters and his estranged wife) goes through wild ups and downs, especially when he's not taking his lithium -- pretty serious subject matter that's too intense for younger kids. There's also a fair bit of swearing, by both kids and adults, including "s--t," "a--hole," and a few uses of "f--k." Characters kiss and make allusions to sex, and there's some behavior that borders on violent (yelling and throwing things) but is attributable to a decline in a character's mental health.

Couples kiss and cuddle. References to past sex escapades. Man shown in underwear.

A man with bipolar disorder throws a bowl in a fit of rage and yanks a part out of a car's engine to stop it from running while his family is sitting in the vehicle. He also sometimes raises his voice and has given kids the finger; they, in turn, sometimes scream and yell back at him.

Families come in all sort of configurations. Love can't easily be nailed down to a specific protocol, but it endures when kindness and compassion reign.

Some brand names spotted/mentioned, including Bentley and Lincoln, but mostly to denote the kind of "old money" cars that Cam's grandmother has.

Cam sometimes relies on alcohol to quiet his demons; he's shown downing shots at a bar (he gets drunk) and drinking beer alone at home. He also smokes a lot (not inaccurate for the time period).