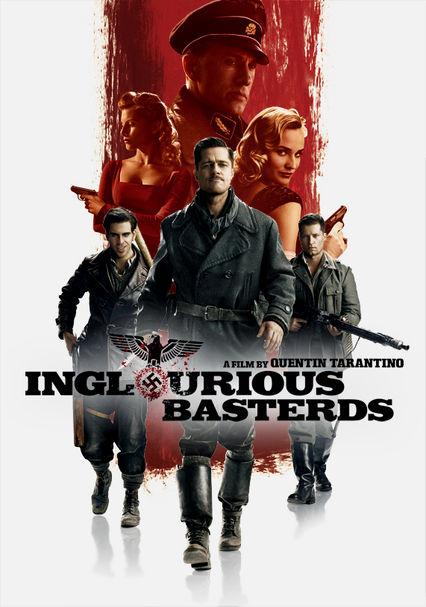 Parents need to know that, like all of director Quentin Tarantino's work, while this World War II adventure starring Brad Pitt is full of food for thought, it's also brutally violent, bloody, and full of harsh language. Expect cringe-inducing beatings, shootings, and more, plus a non-stop barrage of words like "f--k" and "s--t," constant smoking, and plenty of drinking. The film also takes lots of liberties with history and is very talky -- meaning that teens who watch might alternate between being bored to death and shocked by the gory parts.

A few seconds of clothed sexual activity are shown for comedic effect, with no nakedness; some suggestive dialogue.

Strong, brutal, bloody violence throughought, including both war violence (gunfights, shootings, and more) and brutal close-quarters encounters (deliberate mutilation with knives, throat-slashings, scalping). A man is beaten to death with a baseball bat on camera. A woman is shot at point-blank range. A German officer is shown being obliterated by machine-gun fire, bullets pulverizing his body and face into a bloody mass. A man drives his finger into a woman's bullet wound to elicit cooperation and information. Soldiers and civilians are machine-gunned; others die in a house-fire.

Extensive discussion (and depiction) of the pursuit of vengeance and of the role that rumor and fear play in psychological warfare. The film's discussion of the Nazis' extermination of Jews is glossed over in the context of a rock-'em, sock-'em action film.

Characters drink beer, wine, champagne, and hard liquor, sometimes to excess. Characters also smoke cigarettes extensively (accurate for the era), use snuff, and smoke pipes. The medical use of morphine is discussed.