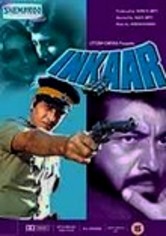 1977 NR 2h 30m DVD
When a kidnapper accidentally nabs the child of businessman Haridas Choudhary's (Shreeram Lagoo) chauffeur instead of Choudhary's son, the compassionate capitalist pays up anyway. But when the captor still refuses to release the boy, the hunt is on to find him alive. In an unexpected coincidence, Amar (Vinod Khanna), the police inspector working the case, was previously rebuffed by Choudhary in his efforts to woo Choudhary's sister (Vidya Sinha).