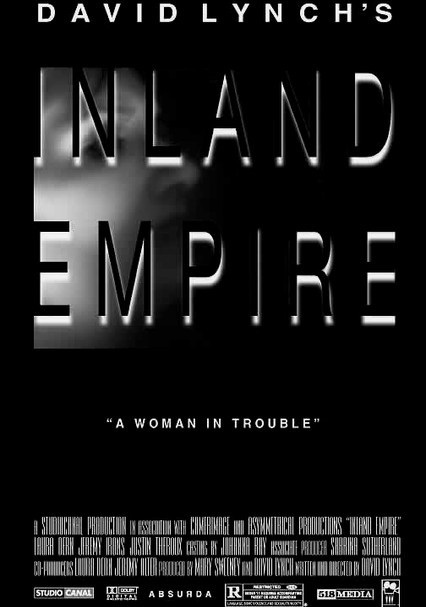 2006 R 2h 52m DVD
Nikki (Laura Dern) is a married actress who ends up bedding her co-star (Justin Theroux), but is it an affair or just acting? When the two start calling each other by their characters' names, the faint line between fact and fiction gets even fuzzier in this David Lynch mystery. Jeremy Irons stars as Kingsley, the director of the film within the film who does little to help the characters -- or the audience -- distinguish reality from fantasy.

Parents need to know that most teens probably won't want to see this strange, practically "underground" David Lynch movie, despite its cast of relatively well-known actors and the fact that Lynch himself has a certain cachet among teens who like their entertainment weird, grotesque, and cool. Much of it defies standard logic, comprehension, and all Hollywood rules of linear storytelling. Plus, although not all experimental movies are filled with adult, disturbing, and taboo material, this one has its fair share.

A physically tame adulterous sex scene is rendered extremely lurid in the context of betrayal and desire. A number of scantily clad Hollywood Boulevard prostitutes recur in the film.

Shocking scenes of stabbing murder by screwdriver, with bleeding, a close up of the wound, and an excruciating death. A woman is beaten. A gun is brandished, but viewers don't see the outcome. Dialogue contains graphic accounts of rape and genital mutilation (male and female).

The "nice" version of the heroine, Nikki, cheats on her husband (or seems to), though their marriage shows no sign of warmth or companionship -- just jealousy and possession. Her alter ego, Susan Blue, is a trashy, foulmouthed woman who's into casual extramarital affairs. (Of course, neither one of the personalities may be real ... or both may be.) Characters worthy of emulation are in short supply.