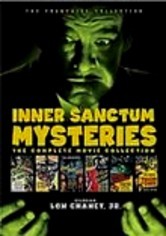 1944 NR 2 discs
Horror film legend Lon Chaney Jr. stars in this collection of six classic tales of suspense based on the popular radio series of the same name. Selections include Weird Woman (1944), in which Chaney plays a professor who marries a South Seas woman raised by superstitious natives, and The Frozen Ghost (1945), in which Chaney portrays a stage mentalist who suspects he committed murder while under self-hypnosis.