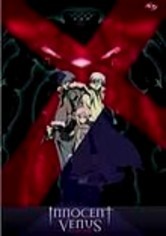 2006 TV-14 3 discs
Two groups inhabit the Earth in the postapocalyptic mid-21st century: the poor and angry Revenus and the oppressive ruling class known as the Logos. When two Revenus escape the Logo regime, a new revolution may be under way. The fugitives, Jo Katsuragi and Jin Tsurasawa, have taken with them a mysterious girl, Noto Sana, who only seems to create more peril in this sci-fi anime TV series.