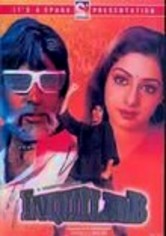 1984 NR 2h 53m DVD
This rags-to-riches tale follows Amar, a poor but popular young man who's hired as a police inspector and eventually becomes a top government official. But when his father-in-law drags him into a smuggling plot, Amar is arrested, and though the charges are dropped, the incident comes back to haunt him. After running for office, he's pressured to appoint criminals to his cabinet, forcing him to conceive a dangerous plan to outwit them.