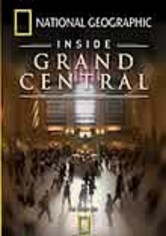 2005 NR 1h 26m DVD
With 750,000 harried commuters passing through it every day, New York City's Grand Central Station is one of the most frequented landmarks in town. But behind its stunning Park Avenue facade lurks a treasure chest full of architectural secrets, including mysterious elevators, hidden tunnels, secret railways and more. Hop on board with National Geographic to learn more about this fascinating urban structure.