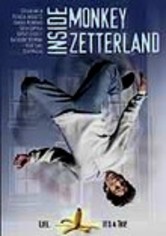 1993 NR 1h 33m DVD
Meet struggling screenwriter Monkey Zetterland (Steve Antin) and his zany family in this quirky comedy by Jefery Levy. Monkey uses his obsession with an extinct subway system of L.A. as fare for his script but distractions prove to deter him. There's his soap opera star mother, his lesbian sister and her girlfriend, his hairdresser brother, his girlfriend, and a fawning neighbor. Patricia Arquette, Sofia Coppola, Sandra Bernhard and Rupert Everett co-star.