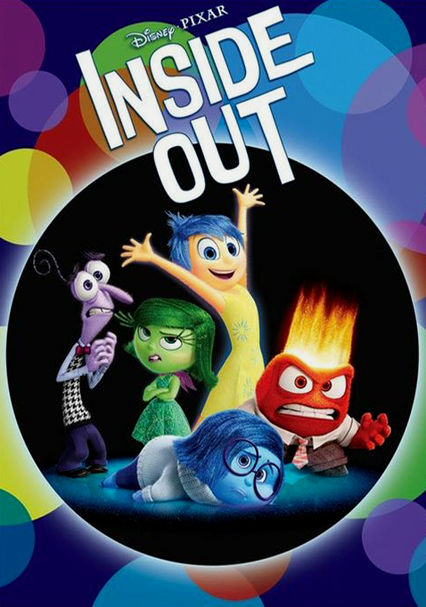 2015 PG 1h 34m Blu-ray / DVD
When her family relocates across the country, tween Riley Anderson struggles with the stress of her new situation and her animated emotions get carried away -- quite literally -- on a fantastic journey through her mind.

Parents need to know that Inside Out is an outstandingly original, heartfelt story from Pixar about growing up and learning to handle your biggest emotions. Told primarily from the perspective of the feelings inside 11-year-old Riley's mind (brought to life by the voices of Amy Poehler, Mindy Kaling, Bill Hader, and more), the plot has many moments of peril/tension -- including bridges/islands crumbling, a train tumbling over a precipice, and characters falling into a deep, dark pit. (Spoiler alert: One key character also permanently fades from existence; that and scenes in which it seems Riley is "borrowing" her mom's credit card and running away are definitely upsetting.) Some of Riley's fears are also on display, including a giant, scary clown. Parents are likely to get hit hardest by the film's heart-tugging moments (bring tissues!), but anyone with empathy will feel for Riley as she experiences life's ups and downs. Ultimately, Inside Out has important messages about needing to feel -- and express -- all of your emotions, whether happy or sad. Although most of the content is appropriate for elementary schoolers and up, younger kids may need a bit more explanation about what's going on, since there are references to abstract thought and the subconscious, and it can be a little confusing when other characters' emotions are shown.

Many of Riley's fears are mentioned/shown, including a dead mouse, earthquakes, and an enormous clown. Some tension/peril when Joy and Sadness are sucked into the memory core and journey back to HQ (bridges/islands crumble, a train tumbles over a precipice, characters fall deep down into Riley's memory dump, the subconscious is dark and scary, etc.). Riley cries in class. Riley's parents bicker due to stress; Riley yells at them. Anger's head bursts into flames when he's really upset. Spoiler alert: A key character ceases to exist; he doesn't die so much as fade away, but it's clear he's permanently gone. Kids may be upset when it seems Riley is running away.

Infrequent use of insult words like "shut up," "moron," "barf," and "dumb." Anger makes references to knowing a curse word; there's one bleeped moment where it's implied he finally said it.

We all have many emotions, and they're all an essential part of life. You can't fully appreciate joy without knowing sadness. Kids and parents should talk honestly and openly to each other about how they're feeling, even when it's hard. Family and friendship help make us who we are. Don't try to be something you're not; love and accept who you are. Teamwork and imagination can solve the most difficult problems. Running away doesn't solve anything.