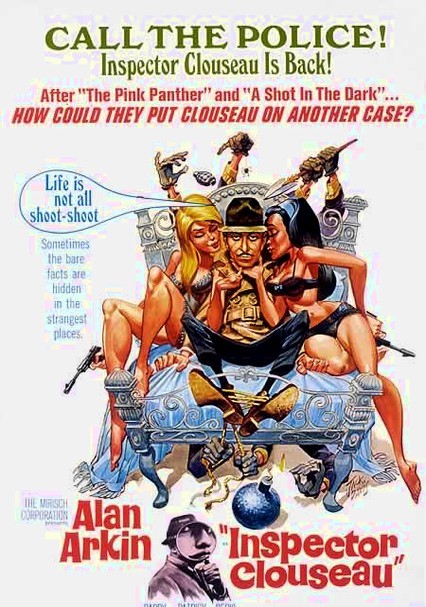 1968 G 1h 38m DVD
When authorities at No. 10 Downing St. learn that the proceeds from the Great Train Robbery are being used to fund larger criminal operations, the bumbling Inspector Clouseau (Alan Arkin) volunteers to investigate. But when a case of mistaken identity makes it look as if Clouseau is involved in the heist, it clouds his reputation -- which is already rather murky. Frank Finlay, Delia Boccardo, Patrick Cargill and Beryl Reid co-star.

Parents need to know that this is not a Peter Sellers vehicle, but rather an attempt to continue the Clouseau comedies with a different actor, Alan Arkin. Many of the classic Clouseau mannerisms, disguises, pratfalls, and jokes associated with later films in the series are absent or toned down here. There are some deaths (bloodless and humorously rendered) via gunshots. Both good guys and bad guys smoke, and there is some drinking and inebriation.

Girls (including a grandmotherly married woman) try to seduce Clouseau in bed, mostly as a pretext to stealing his identity, but nothing explicit is shown.

Though a bumbler, Clouseau is a fearless crimefighter who refuses to be bribed or defeated, even when all the odds are hopelessly against him. He does seem to be a bit of a ladies' man, but here reveals his greatest passion in life is actually food. There is an ageist strain of humor when one of the women chasing Clouseau turns out to be -- horrors! -- gray-haired and matronly. High-level law-enforcement officials revealed as corrupt and part of the conspiracy.

Some distinctive European autos on display.

Much cigarette smoking, some drinking and drunkenness.