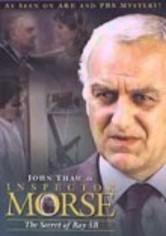 1989 NR 1h 40m DVD
John Thaw reprises his role as the incomparable Inspector Morse, an Oxford-educated cop who always succeeds on the job but usually fails to impress his superiors in this long-running BBC series based on the novels of Colin Dexter. In "The Secret of Bay 5B," the inspector and sidekick Sgt. Lewis (Kevin Whately) uncover more than they bargained for when they investigate the mysterious death of an amorous architect.