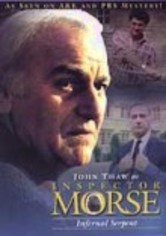 1990 NR 1h 40m DVD
John Thaw stars as the incomparable Inspector Morse, an Oxford-educated cop who always succeeds on the job but usually fails to impress his superiors, in this long-running BBC series based on the novels by Colin Dexter. The case of the "Infernal Serpent" finds the inspector and Sgt. Lewis (Kevin Whately) asking questions about a prominent environmentalist who was killed just minutes before he could deliver a controversial lecture.