Inspector Morse 13: The Sins of the Father 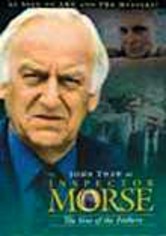 Inspector Morse 13: The Sins of the Father

1990 NR 1h 44m DVD
John Thaw stars as the cerebral Inspector Morse in this episode of the popular British television series. This case centers on a family-run brewing company that comes under scrutiny when its managing director, Trevor Radford, is found dead. What's more, a controversial takeover bid may have figured in the man's demise, as Trevor's brother Stephen was pushing to sell the company. And there are many other surprises in store are Morse digs deeper.