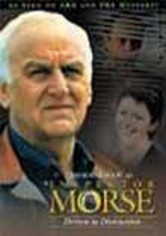 1990 NR 1h 44m DVD
John Thaw stars as the cerebral Inspector Morse in this episode of the popular British TV series. A young woman dies in a hit-and-run, and Morse is called to investigate. The woman's death presses on Morse, who begins to doubt his own driving skills. As he considers selling his beloved Mark 2 Jag, a brash car salesman (Patrick Malahide) soon falls under scrutiny, but -- as is typical for this riveting series -- all is not what it seems.