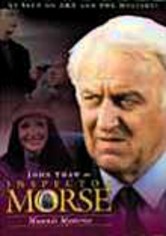 1990 NR 1h 46m DVD
Acclaimed director Danny Boyle helms this 1990 episode of the renowned British television series based on the Colin Dexter novels, starring John Thaw as the scholarly, Oxford-based Inspector Morse. In this installment, the detective's girlfriend is found murdered, having been stabbed to death during a rehearsal at a local theater. But circumstances are reversed this time around, as the Inspector himself becomes the prime suspect.