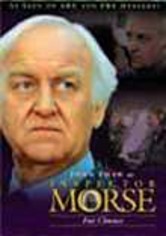 1991 NR 1h 44m DVD
John Thaw stars as the cerebral Inspector Morse in this episode of the popular British TV series that has Morse investigating the death of a clergywoman who was about to make history as the first female chaplain at Oxford's St. Saviour's College. Meanwhile, Morse's well-ordered life could be turned upside down if he follows through on the romantic inclinations he's developing toward a female cleric.