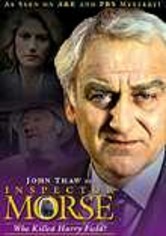 1991 NR 1h 44m DVD
John Thaw stars as the cerebral Inspector Morse in this episode of the popular British TV mystery series. When a painter who apparently faked his art turns up dead, it's up to Morse and his sidekick, Sgt. Lewis (Kevin Whately), to find out what happened. Their journey leads them through a twisted world of "artists" as they uncover several suspects, including the head of an art school who may have been having an affair with the painter's wife.