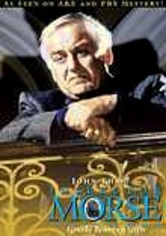 1991 NR 1h 43m DVD
John Thaw returns for another round as the cerebral Inspector Morse -- who employs unorthodox methods but always gets his man -- in this popular BBC television series based on the novels of Colin Dexter. This episode finds Morse's sidekick, Sgt. Lewis (Kevin Whately), distraught after the chef at his favorite Greek restaurant is killed and a child is abducted at the same time. Morse is assigned to the case and soon has a long list of suspects.