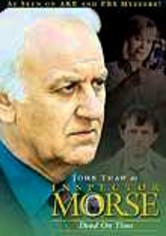 1992 NR 1h 43m DVD
When a high-profile don commits suicide, Inspector Morse (John Thaw) discovers upon taking the case that the victim's widow is none other than Morse's ex-fiancée in this installment of the popular British television series. After evidence turns up suggesting that the mobster's death wasn't suicide after all, the cerebral sleuth must get to the bottom of the mystery as he renews his interest in his former flame.