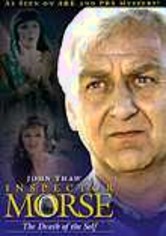 1992 NR 1h 43m DVD
John Thaw stars as the cerebral Inspector Morse in this episode of the popular British television series, in which Morse and his sidekick, Sgt. Lewis (Kevin Whately), are sent abroad to investigate the sudden death of a well-to-do woman traveling in Italy. Her death is at first ruled an accident -- but her husband suspects otherwise. Now, it's up to Morse and Lewis to expose the real story.