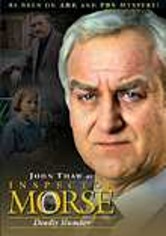 1993 NR 1h 42m DVD
Inspector Morse (John Thaw) is back for another round as the prickly and sarcastic detective who follows his own rules -- but always gets results -- in this popular BBC series based on the novels of Colin Dexter. In this installment, the owner of a private hospital is found murdered in his car, and the suspect is a rich, retired bookie whose daughter suffered severe brain damage as a result of negligence during an operation at the clinic.