Inspector Morse 30: The Daughters of Cain 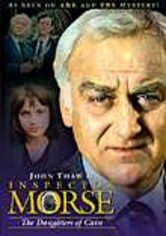 Inspector Morse 30: The Daughters of Cain

1996 NR 1h 42m DVD
Murder strikes at the heart of the university when retired college don Felix McClure is found dead. Inspector Morse (John Thaw) suspects Ted Brooks, McClure's college servant, who left his job abruptly after one of McClure's pupils committed suicide. Morse is not the ideal policeman his superiors think. He's prickly and sarcastic, a confirmed bachelor and an intellectual snob who follows his own rules. But he gets results.