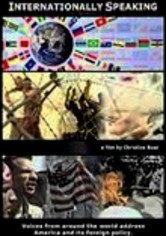 2005 NR 1h 30m DVD
In this documentary, voices from around the world address America and its foreign policy, sharing their opinion of the world's only "superpower," its government, its foreign policy and its people. In the midst of growing international anti-Americanism, real people tell Americans what they think and why in an attempt to further understanding and compassion. Features Medea Benjamin, Noam Chomsky and Michael Ratner. Christine Rose directs.