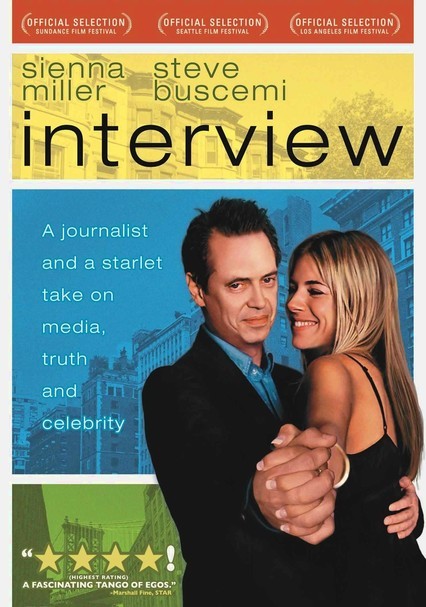 2007 R 1h 24m DVD
When hard-nosed journalist Pierre Peders is forced by his editor to interview seemingly vapid soap opera star Katya, the pair initially clash. But soon enough, they discover that there's more to their personalities than meets the eye.

Parents need to know that this intense indie drama is filled with very adult themes, including war crimes, drug abuse, and suicide. Sienna Miller plays a lightweight actress who stars in a vapid TV show and gore-filled slasher flicks, but her character's personality is brutal and manipulative. So is that of the other main character, Pierre -- who, as a journalist, is ostensibly supposed to tell the truth (though by his own admission, he doesn't). No nudity, but there's plenty of sexualized banter, some of which is laced with incestuous overtones. Also expect liberal use of cigarettes, drugs, and alcohol, and frequent swearing ("f--k," "s--t," and the like).

No outright nudity, but lots of references to sex (for example, Pierre recounts in detail how a transvestite performed a sexual act on him). Two women kiss briefly. Pierre and Katya kiss each other (aggressively) and, once, he positions himself between her legs. She struts in front of him, obviously trying to seduce him (but later, she tells him he looks like her father -- and he tells her she reminds him of his daughter).

Pierre gets into a car accident and hurts his head; lots of screaming between the main characters; Katya hits Pierre, and he shoves her. She also throws things at him.

Both Katya and Pierre are ruthless and cold: They spar verbally and physically and tease each other sexually, even as they refer to each other as father and daughter (which gives those scenes a creepy, incestuous vibe). They drink too much and lie through their teeth. Some bright spots: Katya seems like a genuine friend (she comforts a pal by phone), and Pierre seems like a concerned brother when he visits his sibling in a mental institution.

Some: references to Maker's Mark and Palm Pilot; a laptop computer is clearly an Apple; glimpses of brand names on water bottles and cigarettes.

From beginning to end, the film is laced with substances. Both characters drink to near-oblivion (scotch, whiskey, rum -- you name it). Katya also smokes and snorts cocaine.