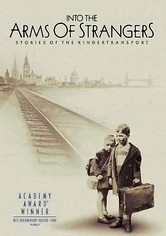 2000 PG 1h 57m DVD
Filmmaker Mark Jonathan Harris's Oscar-winning documentary tells the story of an underground railroad -- the Kindertransport -- that saved the lives of more than 10,000 Jewish children at the dawn of World War II. Through interviews and archival footage, the survivors movingly recount being taken from their families and sent to live with strangers in the relative safety of England. Judi Dench narrates.

Parents need to know that Into the Arms of Strangers: Stories of the Kindertransport, an Academy Award-winning documentary film, gives a human face to a small number of surviving victims of the Nazi Holocaust. While more than 1,500,000 European Jewish children were killed during Germany's ascendance, 10,000 were saved in 1938 and 1939 by a fierce humanitarian effort to get them to safety -- "into the arms" of willing English families who became their guardians. This wrenching separation of children from their families is intimately retold by those actual "children" in this film made more than a half century after the events that transformed their lives. In-depth interviews of the men and women with their vivid memories are enhanced by photographs, archival footage, and a thoughtful narration by Judi Dench. The overall concept is poignant and sad and a grim reminder of humankind's astonishing capacity for evil. That, and some of the footage showing the devastating conditions and emaciated prisoners of the concentration camps upon liberation, makes this important and moving film best for teens and up.

No overt violent acts; however, threat and menace of Nazis' ongoing extermination of Jews, as well as separation from and loss of loved ones, are foundations of the film. Disturbing archival footage of the horrific conditions revealed upon the liberation of Nazi concentration camps.

Celebrates the resilience of the human spirit in spite of horrendous circumstances. Acknowledges the extraordinary contributions of those who were generous, compassionate, and willing to undertake great responsibility in a time of unrest; one individual can change the course of another's life history. A cautionary tale that remembers great evil and the ease with which it spread.