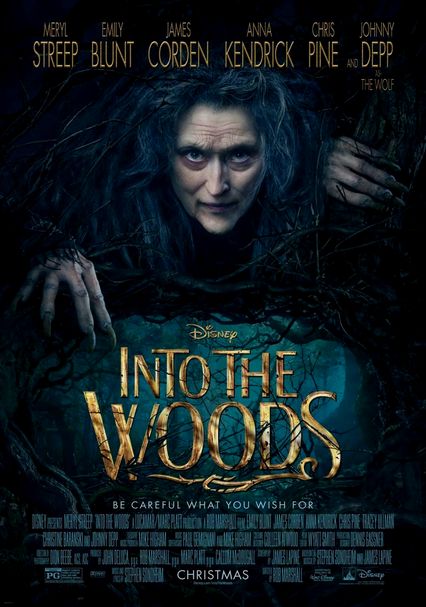 2014 PG 2h 5m Blu-ray / DVD
Woven from a collection of revered fairy tales and characters, this enchanting musical mash-up focuses on a childless couple who venture into the woods hoping to end a curse put on them by a vindictive witch.

Parents need to know that Into the Woods is a beautiful, clever, frequently funny, sometimes somber, and ultimately uplifting take on classic Brothers Grimm fairy tales, based on the beloved musical by Stephen Sondheim. Its presentation of characters like Cinderella, Prince Charming, and more as very flawed people may be confusing or upsetting for younger kids; there's lots to think about here, but it's pretty emotionally complicated stuff. A lascivious wolf preys on a young girl, children lose and are separated from their parents, sympathetic characters die, handsome princes aren't all they appear to be, and there's no promise of happy ending for anyone. Meryl Streep's wicked witch might terrify younger kids, and giants wreak havoc upon the land and terrorize its residents -- but for the most part, the scares are mild. There's no strong language to speak of (though some of the brilliant lyrics are tricky to follow); characters do kiss, and there's an illicit tryst between a couple who are married to others. But teamwork is valued, family is found in unexpected places, and characters tackle moral dilemmas in ways that will resonate with viewers.

Kissing and flirting. Some suggestive song lyrics. Implication that two characters have a tryst in the woods; both are married to others at the time. Some cleavage-baring/racy-looking outfits on Cinderella's stepsisters.

(Spoiler alert!) Central characters die, and others mourn their loss; children are left without parents. Frequent, heightened sense of menace and peril. A lascivious wolf preys upon a young girl; he eventually eats her. A man rescues her by cutting the wolf's stomach open (portrayed with shadows). Villagers attempt to slay a giant after it lays waste to the kingdom (discussed but not shown); the giant's movements cause tremors, falling trees, and other scary situations. The witch can be scary; she comes and goes very abruptly (sometimes with loud noises/smoke) and yells a lot. Jack's mother hits him on the head a couple of times; he's in peril several times. He also has to say goodbye to his beloved pet cow; the cow dies but is resurrected. A prince is cast into thorn bushes and blinded. A baby could be seen as being in peril; his father appears to abandon him because he doesn't think he's cut out to be a dad, but he changes his mind. Cinderella's stepsisters and stepmother are cruel and vicious; the stepmother mutilates her own daughters to further their cause with the prince. Birds come after their eyes.

Teamwork is necessary for success in life, and especially in a marriage. Choices have consequences, sometimes unexpected, and you have to accept them. Love can't be forced; it just has to happen. In order to grow, you have to be brave and take chances, but you also have to consider others' safety and well-being. Family can come in unexpected forms. Parenting is a tricky business. It's not worth pointing fingers when trouble arises; better to deal with the problem together.

Some revelry and carousing during a celebration.