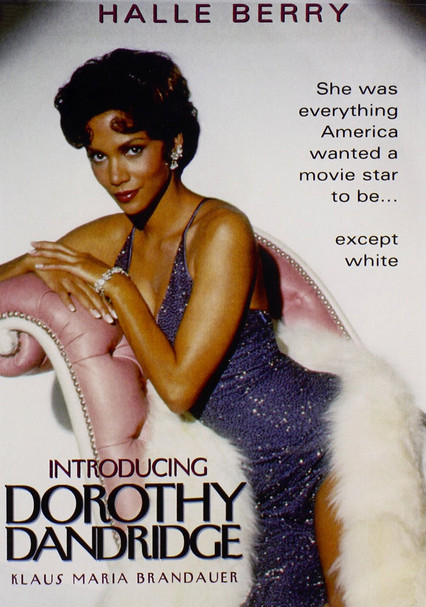 1999 R 1h 55m DVD
Halle Berry stars as singer, actress and dancer Dorothy Dandridge in this biopic that follows the complex star from her beginnings a nightclub act through to her unexpected mainstream success, including an Oscar nomination.

Parents need to know that Dorothy Dandridge, an accomplished African-American singer-actress of the 1940s, '50s, and '60s is a tragic figure and this film attempts to track her downward spiral by following the events, circumstances, and characters who impacted her life. Racial discrimination and exploitation of a talented and beautiful woman are primary elements in this story. Scenes between Dandridge and her only child, an autistic daughter, are heartrending and sad. There is an intense early sequence in which Dandridge is viciously assaulted in the guise of an examination by sadistic guardian and a later scene in which she is beaten by a husband. Characters consume alcohol throughout, and her eventual dependence on prescription drugs plays a significant part in the story's resolution. There are occasional obscenities, including "f--k," "s--t," and African-Americans are referred to as "colored" or "negroes" throughout.

There are numerous sexual scenes which include passionate kissing, some fondling of breasts, undressing, seduction, and an implied lesbian relationship. A lengthy sequence takes place on Dandridge's wedding night when she is nervous and unable to respond to her husband's gentle advances. Though there's lots of revealing clothing, provocative behavior, and talk of sex, there's no actual nudity or overt sexual activity.

In one harrowing sequence, a very young Dandridge is viciously assaulted (with sexual implications) by a female guardian. She later suffers a brutal and bloody beating at the hands of a husband. A discussion of rape.

Dorothy Dandridge's courageous efforts to break the entertainment world's color barrier during the 1940s and '50s prove the value of demanding respect and equal treatment for all.