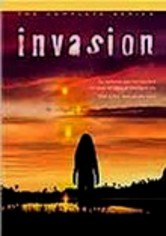 2005 NR 6 discs
Ex-teen heartthrob Shaun Cassidy produces this heart-thumping drama, following the efforts of a park ranger (Eddie Cibrian) to rescue his family after a mysterious hurricane pummels their Florida town. Are they under alien attack, or is there another explanation? At first, his daughter's mention of the strange lights she saw offshore seems to mean nothing, but as the plot thickens, her sighting takes on more significance.

Parents need to know that this sometimes-creepy sci-fi drama includes explicit violence, and the entire concept -- aliens are taking over human bodies -- can be somewhat unnerving. Once they've been changed by the invaders, some characters have uncontrollable murderous urges and no sense of right and wrong.

Some making out, and plenty of skimpy outfits. No explicit sexual content, but some episodes make it clear what the characters are doing off-camera.

Fairly frequent realistic violence (including several murders), but the graphic nature of some scenes demonstrates that real violence has painful consequences. Also, some scenes show alien creatures attacking people abruptly. The violence has increased as the season has progressed.

Mild ("damn," "hell," "ass," etc.). Some of the characters have occasional heated arguments.

Authority figures are in clear, constant conflict. The local sheriff takes advantage of his position to manipulate townspeople and facilitate an alien infiltration. Among the people who have "changed," wildly antisocial behavior (murder, theft, deceit) is common.

Several adult characters drink beer, though not to excess, and some episodes include scenes featuring teenagers drinking at parties.