Investigation of a Citizen Above Suspicion 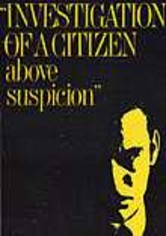 Investigation of a Citizen Above Suspicion

1970 R 1h 55m DVD
A police inspector receives a mission to remove local protesters but instead brutally murders his married mistress. At the crime scene, the murderer himself is appointed to lead the investigation, which launches a twisted tale of corruption.