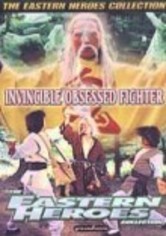 2003 NR 1h 25m DVD
Blessed with innate martial arts prowess, kung fu prodigy Chuck (Godfrey Ho) catches the eye of renowned master Leon Chan, who schools the youngster in the 13 styles of the Shaolin and thus creates the invincible obsessed fighter for which this movie is named. Later, while escorting a treasure to a group of needy people, Chan is injured in a battle with the infamous Eagle, and it's up to young Chuck to come to the rescue.