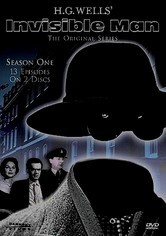 1959 NR 2 discs
When a clandestine lab experiment goes awry, brilliant young scientist Peter Brady (embodied by Johnny Scripps and voiced by Tim Turner) becomes the Invisible Man -- the perfect cover for his new career as a British secret agent. Co-starring Lisa Daniely as Diane and Deborah Watling as Sally, this collection from the first season of the popular television drama (based on the classic novella by H.G. Wells) features 13 remastered episodes.