Invitation to a Suicide 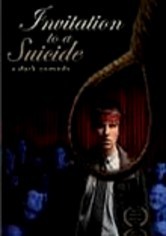 Invitation to a Suicide

2004 NR 1h 25m DVD
A man sells tickets to his own suicide in this absurdist black comedy. Dissatisfied with a likely future following in his penniless baker father's footsteps, Kaz Malek (Pablo Schreiber) steals money from a mobster to fund a new start. But when he's caught, the gangster threatens to kill Kaz's father if he doesn't come up with $10,000. To raise the cash, Kaz charges admission to his own hanging -- but will he give the audience what they came for?