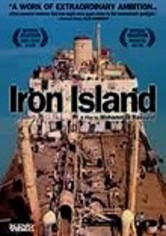 2005 NR 1h 30m DVD
Holed up in an abandoned oil tanker with rusty rooms and a flooding hull, a society of squatters composed of marginalized Arab minorities is slowly sinking, despite the efforts of its self-appointed leader (Ali Nassirian). Helmed by Iranian director Mohammad Rasoulof, this deftly paced allegorical drama makes a poignant statement about life in the modern Muslim world. Hossein Farzi-Zadeh co-stars.