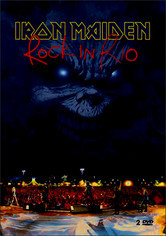 2002 NR 2h 3m DVD
This concert video features the ultimate rock band, Iron Maiden, bringing down the house in a January 2001 concert in front of no less than a quarter of a million fans at the Rock in Rio festival. Tracks performed include "The Wicker Man," "Run to the Hills," "Iron Maiden," "Sanctuary," "Two Minutes to Midnight" and more. Extras include "The Band," showcasing interviews and footage of the group's members; a photo diary; and a featurette.