Is There Life on Mars?: Nova 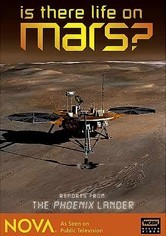 Is There Life on Mars?: Nova

2008 TV-G 0h 56m DVD
This fascinating documentary rounds up eye-opening evidence of the potential for life on Mars collected by NASA's Phoenix lander, a probe sent to Mars in 2008 to join the twin robot explorers Spirit and Opportunity. Just two months after it arrived, the Phoenix confirmed the presence of ice on Martian soil, fueling scientists' belief that the planet is -- or once was -- capable of sustaining life.