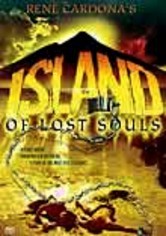 1974 NR 1h 35m DVD
Rene Cardona directs the film version of Jose Leon Sanchez's best-selling novel, which relates the author's 20 years of imprisonment on an island ruled by brutality. When a sadistic man declares himself the boss of an island pueblo, an innocent husband and wife become the victims of his selfish rule. Once the evil man's deeds reach the authorities on the mainland, however, he sinks further into madness and declares "his" island its own republic.