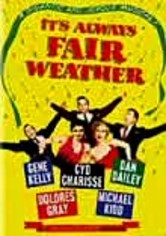 1955 NR 1h 41m DVD
In this satirical MGM musical that garnered Oscar nods for Best Score and Best Screenplay, war buddies Ted (Gene Kelly), Doug (Dan Dailey) and Angie (Michael Kidd) promise to meet 10 years after parting at the end of World War II. But their get-together doesn't turn out as expected. Each man has seen his youthful dreams evaporate, and now a network TV coordinator (Cyd Charisse) wants to feature their reunion on live television.