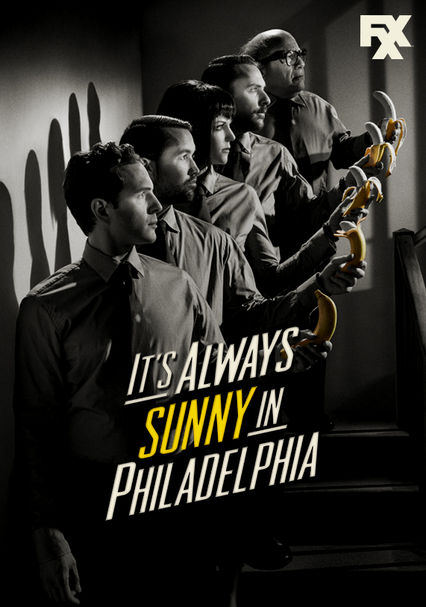 At Philadelphia-based Paddy's Pub, Charlie (Charlie Day) and Mac (Rob McElhenney) battle rumors about racism, Mac and Dennis (Glenn Howerton) feign being against abortion so they can pick up women, Dee (Kaitlin Olson) dates a possible robber and more in Seasons 1 and 2 of this hilarious television series. Meanwhile, a sudden appearance by Dee's father (Danny DeVito) causes a car accident, and Dennis considers running for local comptroller.

The gang from Paddy's Pub returns with more offbeat humor. This season sees Mac, Dennis and Dee trying out for the Philadelphia Eagles and Charlie offering the pub as a prize in a dance marathon. Also, Frank believes Mac is a serial killer.

The laughs go on in Season 4 of this delightfully mean-spirited sitcom, as Frank does a number on Charlie's bed, and Charlie and Dee try cannibalism. Also, a mysterious hole appears in the bar's bathroom, and the gang stages a rock opera.

This season, the shameless gang contends with the ailing economy, puts on a wrestling show and gets caught up in a fraternity beer-pong tournament. Meanwhile, Charlie gets some news about the Waitress, and Mac and Dennis admit they are co-dependent.

Get ready for more misbehavior at Paddy's Pub, where teamwork is a foreign concept. In Season 6 of this comedy, the gang buys a boat and quickly sails into trouble. They also contend with a divorce, an unexpected pregnancy and a rat infestation.

Dee evades an auditor, Frank judges a child pageant, Mac gets fat, and the gang goes on vacation in Season 7. At their high school reunion, the gang tries to be accepted by the "cool kids," though Dennis insists he's already one of them.

The craziness intensifies at Paddy's Pub when Charlie discovers that he was adopted and that his biological father is indulging in a romantic relationship with the Waitress. Frank gets caught up in election-year madness and decides to run for office.

The dysfunctional fun continues at Paddy's Pub in South Philadelphia, where the schemes are more outrageous than ever, and the sarcastic banter flies hot and heavy. Will the gang ever learn how to succeed in business without really trying?

After nearly a decade of hilarity and mutual mistrust, the gang at Paddy's Pub is still dreaming up ways to save the world and take on new challenges, including the in-flight drinking record held by former baseball star Wade Boggs.