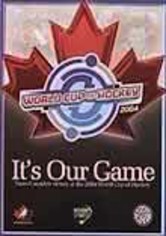 2004 NR 2h 0m DVD
In 2004, eight countries in the ultra-competitive sport of hockey -- Canada, the United States, Czech Republic, Russia, Finland, Sweden, Germany and Slovakia -- battled it out to determine which team deserved to be crowned the king of the sport. From the start, Team Canada, led by ice legends Wayne Gretzky and Pat Quinn and comprised of other hockey greats, were favored to win; watch as they successfully pleased believers around the world.