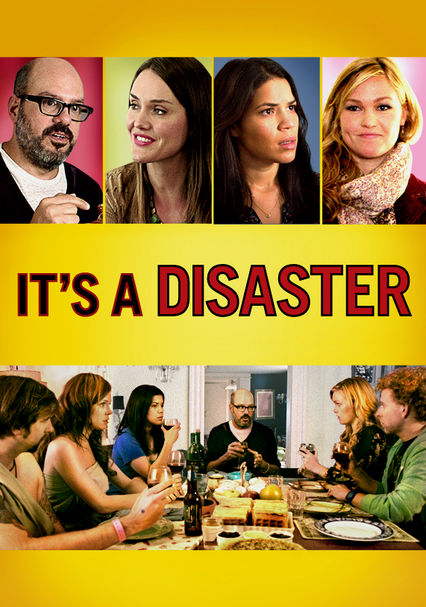 2012 R 1h 28m Blu-ray / DVD
After gathering for Sunday brunch at one of their homes, four couples realize they are stranded together as the world may be coming to an end during an apocalyptic crisis. Nevertheless, they continue to deal with their various relationship issues.

Parents need to know that It's a Disaster is a dark comedy about four couples who come together for brunch just as the world is about to end. Since most of the characters are in their early 30s, there's lots of mature conversation, complete with strong language (including "f--k," "s--t," "a--hole," and more), as well as innuendo and discussion of sex, drugs, adultery, and marriage. As circumstances become catastrophic, all the relationships are strained, one couple has sex (viewers only see them in bed covered by sheets), someone makes a home brew of the drug Ecstasy, and one man looks for makeshift weapons. Because of the intense subject matter and relationship themes, It's a Disaster is best for adults and mature teens.

An unknown invasion has released a toxin that's sure to kill people. A husband threatens to punch another man.

Not a message movie, but it does explore issues related to marital happiness and unconditional friendship.

Brands mentioned or featured include Apple, AT&T, a PT Cruiser, Adderall, Volkswagen, TGI Friday's. X-Men and other comic books are also referenced a bunch of times.

Lots of drinking of wine, scotch, whiskey, and beer. A woman recounts how she and her husband spent the previous night doing cocaine and partying. A chemist makes a homebrew of Ecstasy with a bunch of prescription and over-the-counter pharmaceuticals in the house.