It's the Pied Piper, Charlie Brown 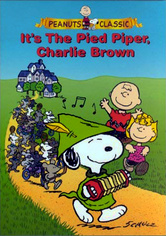 It's the Pied Piper, Charlie Brown

2000 G 0h 25m DVD
Charlie Brown tells Sally a modified version of the Pied Piper legend, with Snoopy playing the title character who tries to rid the Peanuts' hometown of mice that annoy everyone by playing disruptive sports and dancing their way into City Hall. In return for a year's supply of dog food, the Pied Piper Beagle plays his accordion and parades the mice to the edge of town. But what will he do when the mayor reneges on his payment?